Deer on our Property

From time to time we see deer on our property. We've never had such a good view before, though, as we did the other day (on August 4th) where all the kids and could see the deer and watch it for quite a long while.

We were all near our garden when we saw a deer on our driveway. I had heard rustling in the bushes near the driveway a little before that and had wondered what was in there. I guess it was that deer!

The deer walked slowly down the hill and then stopped to eat some blackberries from our bushes. We stayed at the top of the driveway and watched it eat. Then the deer left the driveway and went onto a pathway and away into the forest. See the cat in the bottom right of this picture? That's our cat Joe. (BTW, his sibling is named "Fank." They were named after the Hardy Boys.) 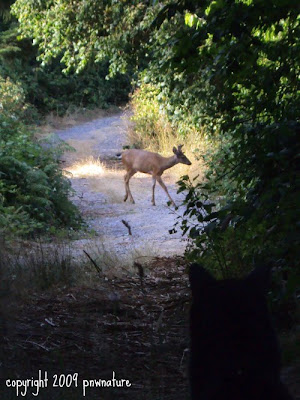