Skip to main content
Labels
Posted by JayLeigh May 19, 2010

A bluebird comes tenderly up to alight
And turns to the wind to unruffle a plume,
His song so pitched as not to excite
A single flower as yet to bloom.
It is snowing a flake; and he half knew
Winter was only playing possum.
Except in color he isn't blue,
But he wouldn't advise a thing to blossom.

Virginia Opossums (also known as "possums") are pretty cute in my opinion. They are about the size of a house cat, and I know some people say they look like a large rat, but, though they may look like a rodent, they aren't -- they are actually marsupials (like kangaroos) and carry their little babies in a pouch.

They are well-known for their response to danger -- they like to "play possum" which means they pretend that they are dead. Here is what Wikipedia has to say about it:

Last week my eleven year old son came across a small opossum behind our house. The opossum appeared to be playing "dead," and my son figured it must have been just learning how to play dead because it would lie there for short while and then lift it's head up to peek at my son standing there, and then lay it's head back down. Considering that "playing dead" isn't a conscious act on their part, but rather that it happens involuntarily when they get really scared, I'm puzzled that this possum seemed to be trying to play dead but kept peeking. It sure was cute, though. My son went to get his siblings so they could see it, too, and while I stayed there watching it, it got up and walked away. I guess we must not have been that scary to it.

Here is a picture of it "playing dead" ("playing possum"): 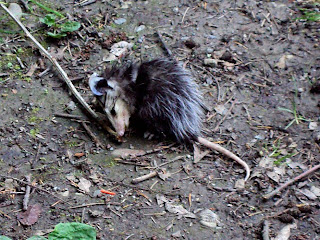 Here is a short video of it walking away: