Skip to main content
Labels
Posted by JayLeigh May 31, 2011

The Rhododendron Garden in Tacoma 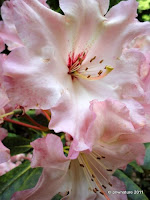 Since, we assume due to the cooler weather we've had this spring, some flowers have bloomed later this year than usual, we figured that the rhododendrons would likely be later, too (I confirmed by looking at pictures from the past three years that the rhodies in our yard are later this year).  When we didn't make it to the Rhododendron Garden as early as we usually go, around the second week of May, we weren't really concerned.

Time has been slipping away quickly this year, though, and we almost didn't even visit the garden in May!  Thank goodness that on the last weekend in May, this past Saturday, as we drove past yards on the way to go somewhere else, after noticing rhododendrons blooming, I remembered the Rhododendron Garden, and our family decided to visit there instead. It turned out well -- there were many rhodies still in bloom, and we even had sunshine by which to enjoy the garden!

One of the first bushes to greet visitors to the garden is the light pink point defiance rhododendron, and on Saturday it was in gorgeous full bloom.  As we walked around the peaceful paths in the garden, we saw many different colors of rhododendrons.  We also saw various ferns and wonderfully tall trees and looked for other native plants. We sat down on a bench near a very large rhododendron bush and ate lunch we had brought with us.

Something my children enjoy doing while walking near each bush is picking up rhodie flowers that have fallen and stacking them on each top of other creating their own unique, pretty, many-colored flowers.  Just a note a caution: while as adults we know that, though beautiful to look at, they are definitely not food, sometimes little children don't know or they forget, so if you have a little one it's important to be aware of the toxicity of rhododendrons when eaten and to take appropriate precautions. 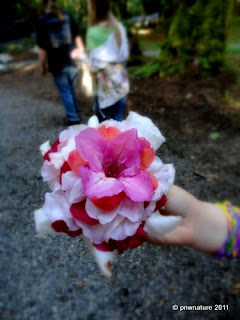 Here are links to two past entries about the Rhododendron Garden: