When we visited the beach at Burfoot Park in Olympia last month, we noticed a lot of eccentric sand dollars lying on the wet sand.  The eccentric, or Pacific or Western, sand dollars are the only type of sand dollar in Oregon and Washington, and they are only found on the northeastern shores of the Pacific Ocean. They are called "eccentric" because of the off-center star or flower pattern which is positioned toward the back of the animal, and because the off-center position, it can stand itself up by burying its front end partly in the sand and feed on small organisms and other organic matter that pass by in the current (you can learn more about that at The West Coat's Living Sand Dollars). This type of sand dollar can grow up to four inches in size and can live 10-13 years.

We visited the beach when the tide was out (but coming in!), and sadly, we saw many dead sand dollars on the beach, and in one area the sun-bleached tests ("tests" are what their skeletons are called) of dead sand dollars covered much of the ground.  Some, though, were alive.

Sand dollars that are alive are pale gray-lavender to dark purplish black in color, and they are covered with thousands of velvet-textured spines. Those that are dead are light in color and smooth, lacking the velvety spines. This next picture shows a dead one on the left and a live one on the right. 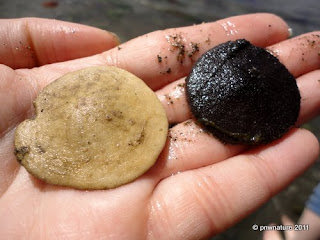 If you, very gently, pick up a sand dollar and turn it over, you can see its spines and tube feet moving.


My younger daughter is examining a sand dollar in the picture below. . .
Here are pictures she took of a sand dollar. . .


I took this picture of her holding a sand dollar. . .

Here my daughter is standing in a "graveyard" of sand dollars. . . 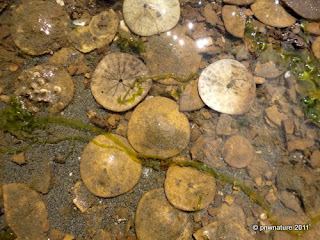 There is one that is alive in the middle of so many that aren't living. . .

The West Coat's Living Sand Dollars
The Biogeography of the Western Sand Dollar (Dendraster Excentricus)
Eccentric sand dollar (South Sound marine life)
Sand Dollars on Tybee…Take the Test! -- This focuses on a different type of sand dollar, but has good information about how to "test" to see if a sand dollar is alive.
Dendraster excentricus on wallawalla.edu
Sand Dollar on EnchantedLearning.com
Sand Dollar on howstuffworks.com
Introduction to the Echinoidea


~* This post is my entry for ABC Wednesday for the letter "E." *~
I'm also linking this to Watery Wednesday.
Email Post
Labels: Beach Burfoot Park summer