We saw what I think is a chiton (the "ch" is pronounced with a "k" sound) yesterday at Sunnyside Beach in Steilacoom, WA, and it was alive! Though we had seen an empty chiton shell before, we had never seen one that was alive. On the bottom side there was a foot.  Here is an except from Wikipedia's page on chitons:


Chitons have a dorsal shell which is composed of eight separate shell plates or valves. These plates overlap somewhat at the front and back edges, and yet the plates articulate well with one another. Because of this, although the plates provide good protection for impacts from above, they nonetheless permit the chiton to flex upward when needed for locomotion over uneven surfaces, and also the animal can slowly curl up into a ball when it is dislodged from the underlying surface. The shell plates are surrounded by a structure known as a girdle. 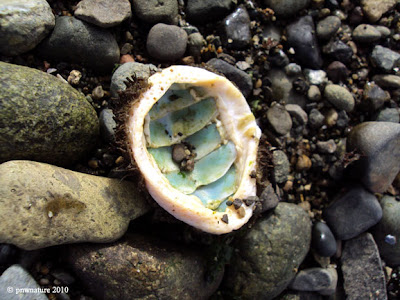 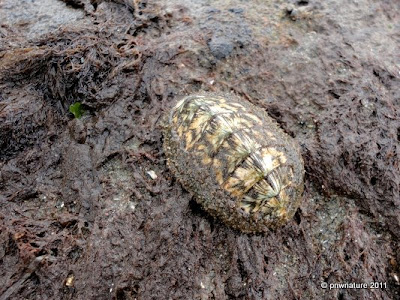