A Crane fly Resting on an English Plantain Leaf 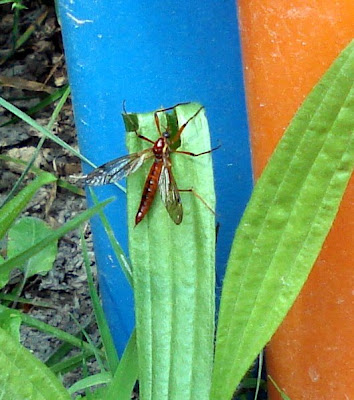 There was a really big bug resting on a leaf near my children's climbing toy a couple days ago. I was working in the yard, and my younger daughter excitedly ran over to me and got my attention, wanting me to come with her so she could show me a bug. When I saw it I was surprised at how big it was and didn't remember ever seeing a bug like that before, and I quickly snapped a picture.

My older son reminded me of a bug he had told me he saw the other day and said that this was the same type of bug. He thought it was a mosquito eater. I (embarassingly) dismissed that idea. After googling, though, guess what I think it is? . . . a crane fly, aka (according to Wikipedia) mosquito hawk, mosquito eater (or skeeter eater), gallinipper, gollywhopper, and jimmy spinner (and in the United Kingdom, Canada, South Africa, Australia, New Zealand and Ireland they are commonly referred to as daddy long-legs -- though here in the US part of the Pacific Northwest we call a type of spider by that name). By the way, even though they are sometimes called "mosquito eaters," they don't eat mosquitoes.

There are many types of crane flies, many or most looking very much like giant mosquitoes, and the poor creatures are often misunderstood and many people worry they will bite them or mistakenly think that they are mosquitoes. They don't bite humans, though, or animals. The EPA website says adult craneflies are "harmless."

In appearance crane flies seem long and gangly, with very long legs, and a long slender abdomen. The wings are often held out when at rest, making the large halteres easily visible. Unlike most flies, crane flies are weak and poor fliers with a tendency to "wobble" in unpredictable patterns during flight, and they can be caught without much effort. Also, it is very easy to accidentally break off their delicate legs when catching them, even without direct contact.

Crane flies vary in size, with temperate species ranging from 2 mm up to 60 mm, while tropical species have been recorded at over 100 mm. The Giant Crane Fly (Holorusia rubiginosa) of the western United States can reach 38 mm (1.5 inches). Some Tipula species are 64 mm (2.5 inches). Many smaller species (known as bobbing gnats) are mosquito-sized, but they can be distinguished from mosquitoes by the V-shaped suture on the thorax, non-piercing mouthparts, and a lack of scales on the wing veins.

On the website CraneFlyPests of the Pacific Northwest , Sharon Collman of the EPA wrote the following description of crane flies:

Crane flies are generally beneficial two-winged flies that look a bit like large mosquitoes. Despite their somewhat scary appearance, they don't bite, suck blood, or carry diseases. In fact the adults are harmless and rather comical as they bounce around the landscape and off interior walls. They are also an important food source for birds and other critters. The aquatic larvae of many crane flies are indicators of good stream health, and become fish food. Other crane flies are decomposers and help break down decaying organic matter.

The CraneFlyPests of the Pacific Northwest has a lot of information about craneflies, including these identification guides -- A Graphic Guide for Identification of Adult European Craneflies; Tipula paludosa and T. oleracea and Pacific NW Native Crane Flies -- and this FAQ.

Edited to add a new picture of a crane fly resting on our front door. This picture was taken on 17 June 09: 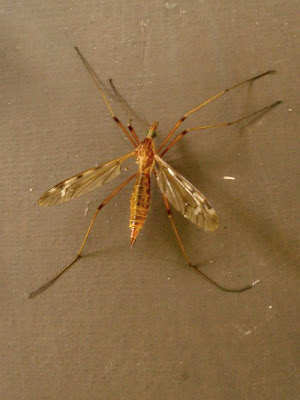