Update on our Garden 3

I started an update on 5/30 but never finished, so I'm going to keep the old part, and then write the new part below that.

The exciting news is that the sweet peas, at least one pea plant, and the corn have sprouted up.

The sad news is that the cucumbers and cabbage our really doing poorly.

I have to confess that I didn't find out what "harden off" meant until the day I wanted to begin planting, and I was so eager to plant things that we didn't harden off the cucumbers or pumpkins (the pumpkin plants seem to be pretty okay) first before planting them. The cabbages we hardened off for a few days before planting them. We have so many extra plants, I thought an experiment would be good, anyway.

The rest of the plants we have been bringing inside each night for a little over a week now. Last night for the first time we left a few of them outside overnight.

After the seedlings seemed to be ready to plant outdoors in the garden, we planted some more pumpkins and cucumbers and cabbages. The cucumbers that spent more time getting a chance to "harden off" seem to be doing a lot better than the other cucumber plants (most of the others died). The pumpkins are still doing fine. There are a few cabbages that look nice.

My mom bought us a tomato plant, and we have some tomato plant seedlings still growing that we haven't planted outside yet.

Of the seeds I planted directly in the garden, the corn is growing well, and so are the sugar snap peas. There are about three or four pea plants that are growing (we planted more, so I don't know what happened). The zucchini plants are growing. The carrots finally popped up, but you can hardly see them. The radishes. . . well, some of the leaves are missing, so I'm guessing that some creature got to them somehow, so there won't be many to pull up (I might try again, though). 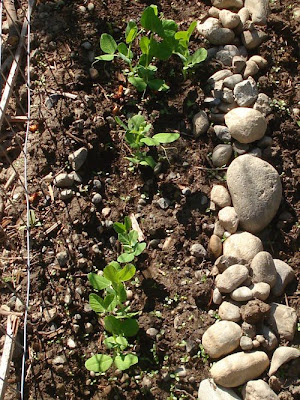 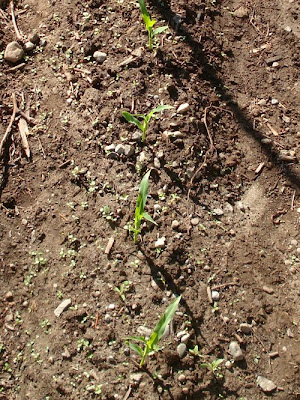 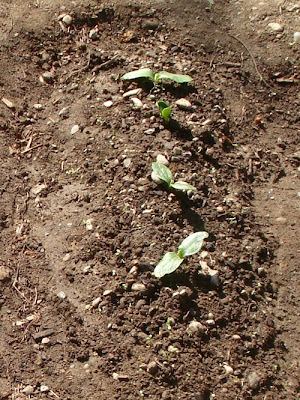 I also planted a couple cucumber seeds directly in the garden, but the little plants that had sprouted up mysteriously disappeared, and I'm guessing slugs did it because we saw a cucumber plant with slug slime on it. To help deter slugs, I've started watering the garden with a watering can so that the outside of the garden stays dry. I've also put some old stalks from blackberry bushes down on the ground hoping to make the slugs decide the trip to the garden is not worth the risk. I'm also praying.

I put up a scarecrow the other day because what is a garden without a scarecrow, right? I just wish we could put up a scareslug and scareaphid and scaremouse and . . . whatever else there is out there that might get our precious little garden!! But at least our garden looks cute. ;) 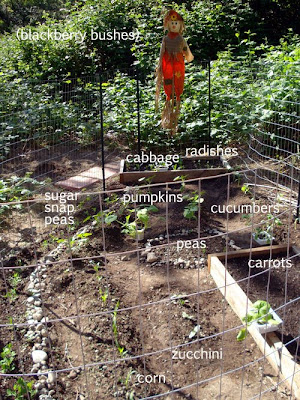 Links to past posts about our garden: