The Narrows Park in Gig Harbor

Last Saturday we went to Narrows Park in Gig Harbor, WA, for the first time.  The 34 acre park is owned by PenMet Parks.  It is located on the shoreline south of the Tacoma Narrows Bridge, a pair of twin suspension bridges, and has 1,200 feet of sandy-rocky beach (see the PenMet Parks Website).

The address is 1502 Lucille Parkway NW.  We found Lucille Parkway NW all right, but after that we had a little hard time finding the park at first because the map I had printed out didn't have the place marker in quite the right spot, plus we couldn't find a sign for the park. The PenMet Parks Website that lists the park says a "newly relocated entrance and large sign makes the park easier to find," so I'm not sure what we did wrong. Maybe I looked for the sign in the wrong place? Here is the only sign we found. . .

Thank goodness my husband is good at finding places, though, and he spotted the park quickly after just a little extra driving around.  On the map you can see that you reach the entrance to the park by driving down Lucille Parkway NW until you reach Doc's Drive. To reach the beach, you drive down Doc's Drive until you arrive at a parking lot. Here's a picture my younger daughter took of part of the parking lot with the Tacoma Narrows Bridge in the background.
After my husband parked the car, we walked down to a gazebo with a telescope beside it. . . . 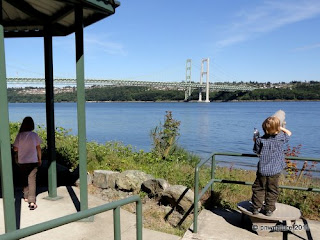 Here are a couple panorama views.  I think the first one was take up near the telescope, and the second one was taken down on the beach. I'm not the best at doing panoramas with my camera, but it'll give you a good idea of what it looks like there. . .

Below are a couple pictures of the beach that my younger daughter took: 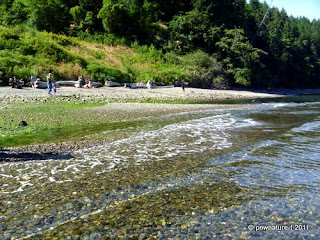 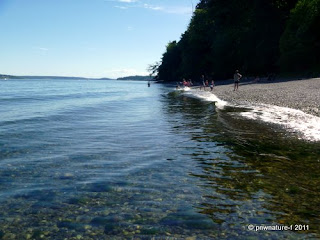 The park doesn't actually go all the way down to the Narrows Bridge, but though we saw an old out-of-date sign (PenMet Parks owns Narrows Park now) tipping to the side which said "PIERCE COUNTY PARKS BEACH BOUNDARY LINE," we didn't see any signs saying not to travel further down the beach, so we kept on walking along the shore until we reached the twin bridges.  We really wanted to get a good look and see what it would be like to stand under them.


We also saw some interesting things along the beach.  My younger daughter noticed this bull kelp and commented on the way it was attached to a rock.  I looked it up and found out that the part that looks like roots attached to the rock is called a holdfast. 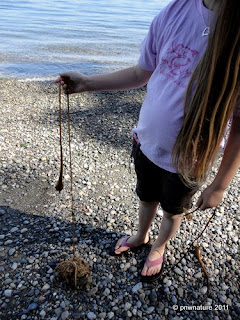 We saw a jellyfish that as far as I know is a moon jelly.  It appeared to us to be upside down. In case it was still alive, my older daughter picked it up with leaves and laid it in the water.  She said it felt a lot like jello or like one of those gel-pads you put in shoes to make make them more comfy.  We don't think it was alive after all, though. 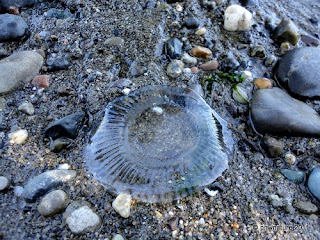 We also saw some flowers. In the picture below the top flowers are fireweed.  I think the flowers in the bottom part of the picture are a type of honeysuckle. 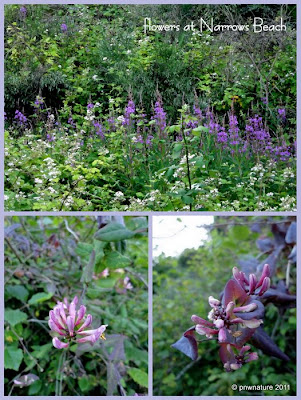 When we returned from walking along the beach, we quickly stopped by the telescope again.  The area was now in shadow. . . 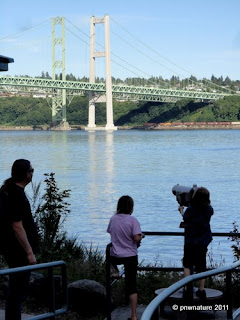