The other day after my friend posted on her Facebook status that she had made some huckleberry muffins, that sounded so good to me that I decided I would like to make some, too, if possible!  Last year while walking around our property we were excited to find a red huckleberry bush, and I hoped that ours had enough berries on it.

My imaginative kiddos like to call red huckleberries by the name of "poison apple berries" because they look like shiny bright red pretty little apples (you know, like in Snow White).  Actually, though, they are edible and good for you with their high vitamin C content, and they taste pretty good but are a little tart. So if you like a little tartness, you'll probably really like them. 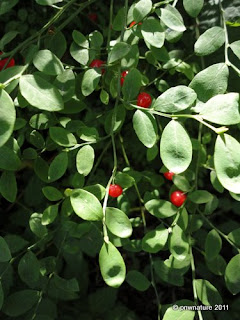 In the early afternoon I and my younger daughter went to look and see how our bush looked and to see if their were ripe berries on it. It looked great, so later all of my children and I walked over and picked just about as many berries as we could, hoping it would be enough for the muffins. I didn't measure how many we got, but we found it to be enough for our muffins! 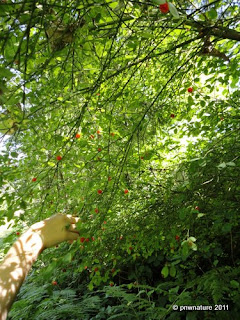 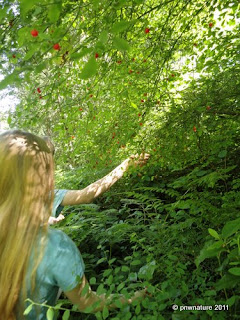 I found a Huckleberry Muffins recipe on allrecipes.come that I tweaked. I usually have to tweak recipes because we don't eat diary or eggs, but I didn't mean to change it as much as I did! While mixing the ingredients together on the dining room table, I kept running into the other room to read the recipe on the computer, and I got things mixed up in my head and put 1 3/4 cups of rice milk when I was supposed to put 1 3/4 cups of flour! Oops!!  I caught my mistake and added extra flour, and thank goodness they still turned out fine.

I'm going to post my "recipe" (notice the word "recipe" is in quotes) below, but I would strongly recommend that you visit allrecipes.com and check out the Huckleberry Muffins recipe there for a more exact version.

Then cream the sugar and Earth Balance together and add the wet ingredients (except for the vinegar -- that I like to add at the end to activate the baking soda which helps the muffins rise) and stir it all together.  Sprinkle a little flour on the berries and stir to coat them, and then stir in the berries.  Add and stir in the apple cider vinegar.  When you do that you'll see the batter get a little more puffy.  It's good to try to get the muffins in the oven quickly after adding the vinegar because that puffiness helps the muffins rise in the oven.

Cook for about 15 minutes in the preheated oven. I cooked mine just a little bit longer. When done they should be golden, and the tops should spring back when lightly pressed.  I often test my muffins to see if they are done by putting a knife in one of them and seeing if any batter is on the knife when I pull it out.  If it doesn't have any on it, then that seems to mean they are done.

We all really enjoyed the muffins! They tasted a bit tart, but not too much, and to me the taste of the berries in the muffins was reminiscent of rhubarb, but not that strong. I read that some people like to mix other berries like blueberries in with the red huckleberries, so if you find them too tart on their own for your tastes, you could consider doing that. I was also interested to read on Edible Wild Plants in B.C.--the Red Huckleberry that "A good rule of thumb for preparing dishes using huckleberries is to treat them like you would rhubarb, using the same amount of sugar and so forth." She has a recipe there, too, that you might like to check out, for Upside-Down Red Huckleberry Crumble that you can make while camping! 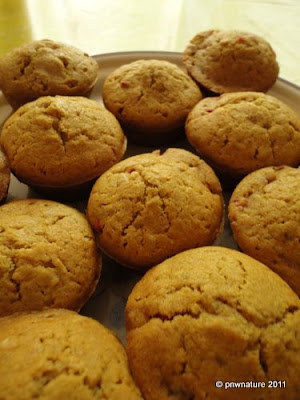