When we first brought Cinnamon, our cinnabar caterpillar inside and put him in his little habitat that we'd made for him, after he settled in he seemed pretty content just eating and eating and eating. He seemed less content the next day, though, so we created a new habitat that we hoped would give him more room and a more exciting environment that he would enjoy. It didn't work, though, and he was even less content the next day.

We rearranged things, gave him fresh flowers to eat, gave him a new stick to climb, but still he was restless, very, very restless. We hardly noticed him eating, and he kept wandering around his habitat, like he was looking for something. He seemed confused by the glass, almost as if he felt that if he could just try hard enough, he would be able to get through it.


Here he is in his habitat with the extra stick. . .
(the little orange arrow is pointing to where he is) 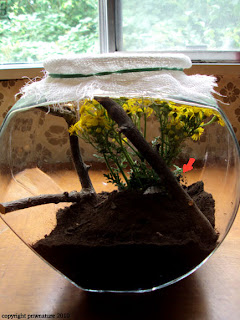 Just look at that sweet face! I felt so badly for him, because he seemed so restless and kept trying to climb the glass. He seemed weaker the third day we had him, like he was getting tired. 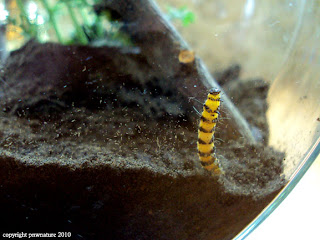 I finally decided I'd better google again and see if I could find out more information about this type of caterpillar so we could better meet his needs. I found out that cinnabar caterpillars pupate in dry, sheltered places such as in the debris at the base of tansy ragwort plants. I read that before they pupate they eat and eat, and then when the right time comes they start searching for a place to pupate (that's the time when they create and live inside a cocoon) and would pupate for 9 months before emerging as a moth!

After reading those things I went and looked in his habitat, and he was nowhere to be found! I worriedly yelled for my children to come and help me find him!! Finally I started taking things out to make searching for him easier, and my older son found him at the bottom of the plant, lying still, and partially buried in the cotton in the jar the plants were sitting in. Concerned he might suffocate there, I reached in and carefully took him out.

Feeling like I was letting everyone down, I explained to my children about what I had read and shared that he'd probably be happier outside, that he seemed so restless and so much like he was looking for a place to create a chrysalis* [please see my note at the bottom]. I let them know, too, that I didn't feel like I knew enough to care for him and didn't feel up to the responsibility and was worried about keeping the chrysalis* for nine months. My sweet children had mingled feelings of disappointment and understanding.

My older son gently carried Cinnamon as we traveled to the area where the plant was where we had found him three days prior. Each child held him, and we said our good-byes. 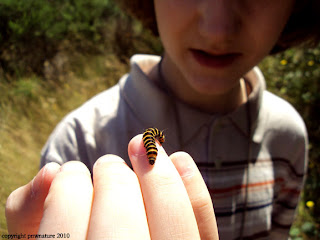 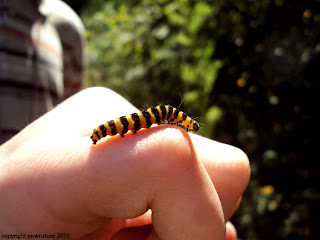 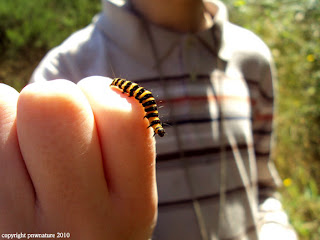 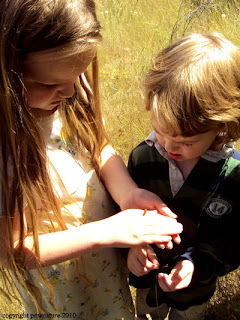 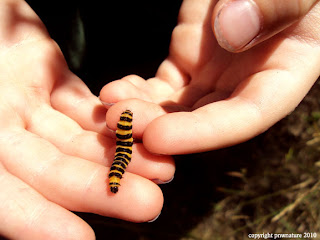 Then my older son held Cinnamon up to the plant and carefully helped him climb onto it. Cinnamon crawled around a little and then promptly went to the end of a branch and dropped off onto the ground. We were afraid that was the last we'd see of him, but finally we found him. My son picked him up, and put him on the plant again, but closer to the ground. Cinnamon kept going lower and lower on the plant, and then finally he crawled down it's base and off into the grass beneath it. 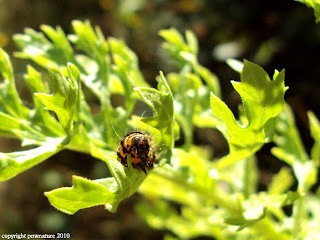 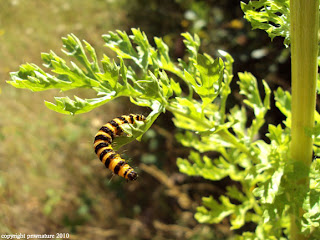 Here is the last picture I took of him. See how it looks as if he's looking at us? We think he's saying good-bye! Good-bye, dear Cinnamon! We miss you and hope you are safe and content. ♥ 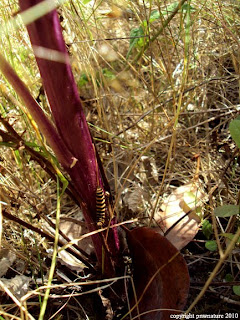 Caterpillars, moths, and butterflies are fascinating, and there is so much to learn about them! Here are some links that can help you find more information about them.

What is the difference between a butterfly and a moth? - On the "Everyday Mysteries: Fun Science Facts from the Library of Congress" website.

Cinnabar Moth - this is a website in Australia, so remember that their seasons come at different times there than those here in the Pacific Northwest. It's a website about weed control (cinnabar caterpillars eat tansy ragwort which is considered to be a "weed), but it has interesting information about cinnabar moths and caterpillars.