Skip to main content
Labels
Posted by JayLeigh May 25, 2009

My ten year old son took this picture of a raccoon peaking around a post on our front porch: 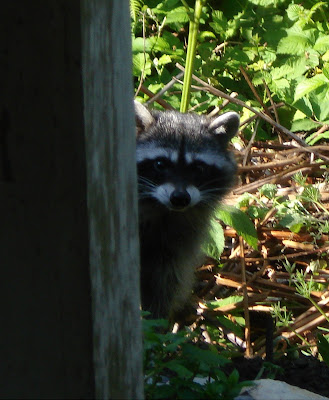 We think raccoons are adorable. Not that I want a whole bunch of them around; I don't. But look at that face! How can you not think that face is cute?!

We used to wonder why our outdoor cats had dirt in their water when we would check their water the next day after setting out clean water the day before. My mother-in-law solved the puzzle for us. She explained that the raccoons like to put their hands, er, I mean paws, in the water!

Talking about paws. . . have you seen theirs? They use them like hands. It's so cute to see a raccoon picking up cat food from a bowl with their hands and bringing the food to their mouth to eat it.

We hadn't seen a raccoon for quite a while, but my son saw this raccoon on the 22nd of May, and he saw a raccoon again tonight. We'll be watchful to see if we can see anymore! :)

Wikipedia's page on raccoons http://en.wikipedia.org/wiki/Racoon says that, "The raccoon (Procyon lotor), sometimes spelled as racoon,[2] and also known as the common raccoon,[3] North American raccoon,[4] northern raccoon[5] and colloquially as coon,[6] is a medium-sized mammal native to North America. As a result of escapes and deliberate introductions in the mid-20th century, raccoons are now also distributed across the European mainland, the Caucasus region and Japan. Their original habitats are deciduous and mixed forests, but due to their adaptability they have extended their range to mountainous areas, coastal marshes, and even urban areas, where some homeowners consider them pests."