Skip to main content
Labels
Posted by JayLeigh May 18, 2009

Should Bees be able to Fly?

This picture was taken by my son (age ten): 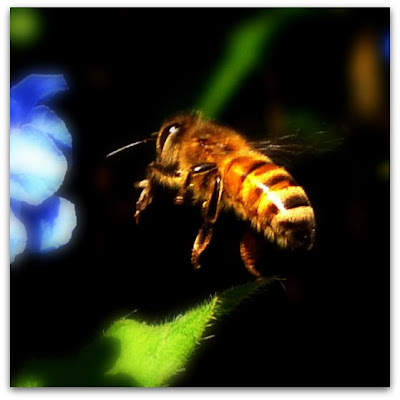 Have you heard the idea that aerodynamically a bee shouldn't be able to fly but it does anyway? It's a popular idea that has been spread around so much for so many years that many people believe it's true. The idea was presented in French etymologist August Magnan's book Le Vol Des Insects way back in 1934 that it was aerodynamically impossible for a bee to fly. In other words, it was felt that a bee had wings too small too produce enough lift to allow the bee to get up into the air.

I started looking into this when I read recently in a book that aerodynamically bees shouldn't be able to fly. The author shared that about bees because he wanted to encourage his readers to not give up, because, like a bee, we can succeed even when the odds seem to be against us -- we, too, can accomplish what seems to be the impossible. I felt encouraged after reading his words, so I admit that part of me hoped what he said about bees was true.

After looking it up I felt a tad disappointed, though not surprised, to find out that it's not true afterall, at least not the part about how bees shouldn't be able to fly. It's true that an airplane the size of a bee, moving as slowly as a bee, would not be able to fly, yet bees aren't little airplanes (but you knew that!), so the scientific rules that apply to them are different.

In 2005 some scientists figured out how bees fly. It's very cool that they learned more about how bees fly, but it rather ruins the little anecdote about bees. Yet it doesn't change the truth that the way that bees fly is amazing, and unusual for an insect. According to this article on ScienceDaily.com, "The secret of honeybee flight, the researchers say, is the unconventional combination of short, choppy wing strokes, a rapid rotation of the wing as it flops over and reverses direction, and a very fast wing-beat frequency."

You see, a bee beats it's wings in a smaller arc than other insects -- instead of beating them in an arc that is almost half a circle, bees often beat them in an arc about half that big. And in comparison with other flying insects, it beats it's wings really fast. Because aerodynamic performance decreases with size, usually the smaller the insect is, the faster it beats it's wings, but a bee actually beats his wings faster than a fruit fly (which is a lot smaller than a bee). A bee flaps it's wings 230 beats per second (where as a fruit fly beats theirs 200 times a second). Can you imagine?

Even though the idea that bees shouldn't be able to fly isn't scientifically valid, I still find encouragement when considering the amazing way a bee flies. And the deeper truth that a bee accomplishes what seems to be the impossible, and that we, too, with God's help, can do the same, still holds.
Email Post
Labels: bugs