We went outside tonight and saw the planet Jupiter in the sky! It's closer right now than it has been in over 50 years, and it looks like a very bright star in the sky. We had heard it should be easily seen, but we didn't know exactly where it would be, and at first we weren't sure if we were actually seeing Jupiter (or a satellite!).

We went inside for awhile, and I found an article online that said to "look for it near the moon in the southeastern sky," and that's exactly where we had seen it! So we went outside again and had another look. Jupiter and the moon had moved farther west when we looked the second time. It was like Jupiter was following the moon. We felt thrilled to see Jupiter so clearly. We loved the brightness of the moon, too. They were both just gorgeous together.

In the first two pictures, Jupiter is the bright dot on the left side of the picture, and of course the other bright circle is our moon.  It's not quite full yet, but will be full on Thursday the 23rd (the harvest moon). 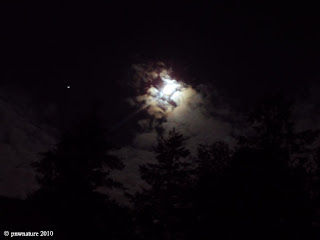 The next picture is a picture of our moon taken by my older son. 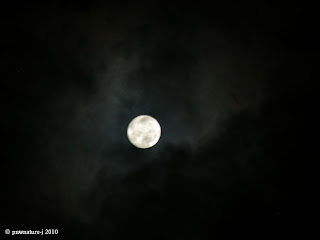