When we received the invitation to the Grand Opening of Red Wolf Woods at Point Defiance Zoo & Aquarium in Tacoma, WA, that was sent to zoo members in the mail, my 11 year old son immediately wanted to attend. I wasn't so sure because it would be hard for us to go, there would be crowds, etc. . . After thinking about it for days, I finally decided that this was something really important, and that we should go. The opening was last night, and though we couldn't stay to hear the speakers, we truly enjoyed ourselves. It was wonderful to see the beautiful wolves and their new home and learn more about red wolves, and my children got to do a few fun, wolf-related activities. 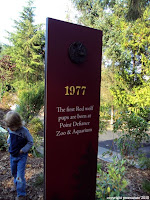 I remember the old red wolf exhibit at the Point Defiance Zoo. It had a small area with a tall chain-link fence. It didn't look like a very exciting place to live. I admit I wasn't impressed by their habitat back then, and I felt badly for them. I didn't know very much about red wolves and the role the zoo has played in helping save them from extinction, that is until my son started telling us about it.

And wow, it's an amazing story. Red wolves were declared to be an endangered species in 1973 and were declared extinct in the wild in 1980. The captive breeding program was founded from 14 wolves, and from those 14 wolves, there are now about 300 wolves, with 100 of those living in the wild! The red wolf is the first U.S. species to be successfully reintroduced after extinction in the wild, and the Point Defiance Zoo & Aquarium played a crucial role by helping lead the red wolf breeding and reintroduction program.

Though red wolves were once common throughout the eastern and south central United States, as far north as Pennsylvania and New York (possibly even farther north) to as far west as Texas, due to trapping, poisoning, shooting, and destruction of critical habitat their population declined drastically, so much so that there were barely any of them left, and those who were left were sickly (see Rescuing the Red Wolf: Red Wolf Fact Sheet). In a desperate final attempt at saving red wolves from extinction, between 1973 and 1980 scientists captured the remaining red wolves in the wild (see Red Wolf Recovery: A Rosy Picture), and red wolves were declared extinct in the wild in 1980.

Though biologists captured 400 animals, only 17 were certified as pure red wolves (the others were a hybrid of coyote and red wolf) (see Rescuing the Red Wolf: Wolf Fact Sheet). Fourteen of those were chosen to be the founders of the successful captive breeding program which began at the Point Defiance Zoo & Aquarium. From the beginning of the breeding program, introducing the red wolf back into its natural habitat has been their goal.  In 1987 the introduction began with the release of four pairs of red wolves into Alligator River National Wildlife Refuge, and according to the US Fish and Wildlife Service, "over 100 red wolves roam their native habitats in five northeastern North Carolina counties and approximately 200 comprise the Species Survival Plan captive breeding program in sites across the United States." 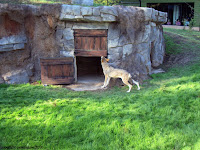 The new Red Wolf Woods exhibit at Point Defiance Zoo & Aquarium beautifully honors the 40-year recovery program and the zoo’s role in it.  Signs around the exhibit share history and information about red wolves and their importance, and the exhibit provides a well-designed, comfortable habitat for the wolves who live there, a breeding pair named Graham and Ocean Blue and three 3-year-old sisters Nami, Tala, and Mika. 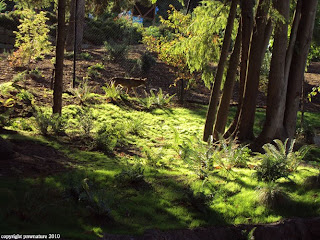 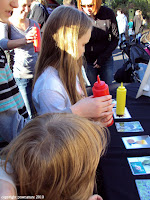 On Labor Day weekend the Point Defiance Zoo and Aquarium is going to open the exhibit to the public and celebrate the grand opening of the Red Wolf Woods with a weekend of festivities.  The special activities will last through Monday and will include "educational activities for kids, mask-making, enrichment treats for the wolves, and special talks by the people who care for the wolves on a daily basis" (from The News Tribune: Point Defiance Zoo to open Red Wolf Woods). 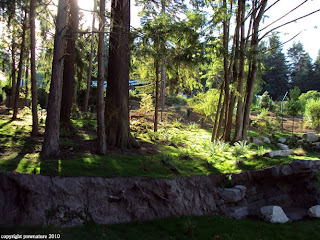 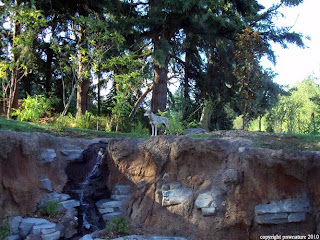 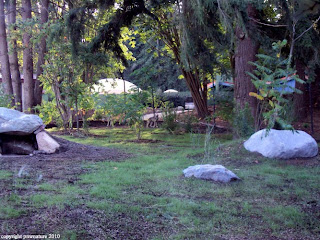 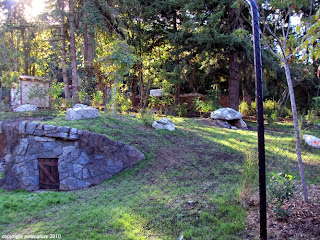